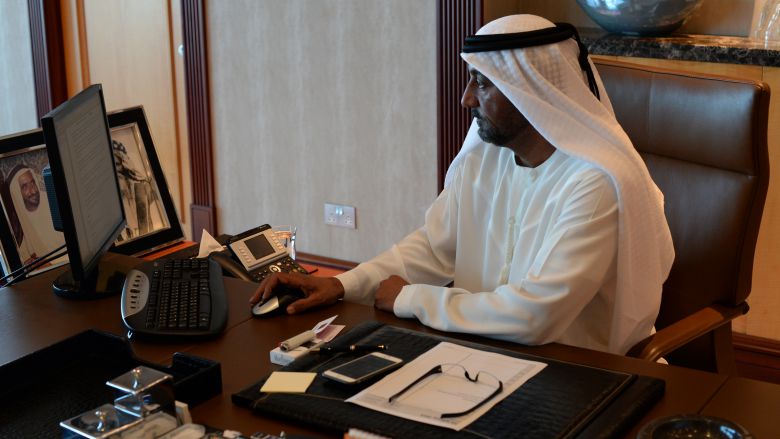 Sitting behind his desk checking his computer, Sheikh Ahmed bin Saeed Al Maktoum has little time to spare. The dynamic sheikh is, after all, the head of numerous high-profile government conglomerates in Dubai, prompting him to stay up to date with the latest news in order to be on top of his game.

With portraits of Dubai’s former rulers Sheikh Saeed and Sheikh Rashid on the right side of his desk, Sheikh Ahmed met Newsweek Middle East’s team at his office overlooking the world’s busiest airport, where he discussed everything from the drop in oil prices to the lifting of sanctions on Iran, and more notably Emirates Airlines’ profitability.

Emirates Airlines
Throughout the interview, the tireless sheikh kept a pleasant smile–and he has all the reasons to be smiling. Dubai’s flagship carrier Emirates Airlines is expected to announce higher annual profits for its fiscal year ending in March.
“We should finish with a better number [profits] this year,” Sheikh Ahmed, 57, said, anticipating a 28-year profitable performance for the airliner.
Emirates’ profits jumped 40 percent in its fiscal year between March 2014 and March 2015, recording $1.24 billion in profits.

The increase comes against the backdrop of lower fuel costs due to a continued drop in oil prices, which reached historic lows under $29 a barrel in January.
“I think that it is a big plus that oil prices are down because we [the airline] are one of the largest oil [fuel] buyers in the country and we operate long routes. If we calculate it today, less than 30 percent of our total cost is fuel. When oil prices were high, [our fuel cost] were 45 percent to 48 percent,” he added.
The airliner is the largest by far in the Middle East, and one of the world’s most competitive and constantly growing companies in the business.

Emirates Airlines has shown its bold colors by venturing into markets which other international airliners have pulled out from.
For example, some airlines have stopped flying to Pakistan citing security threats, while Emirates opted for increasing its flights to Karachi from four to seven.
“I think when it comes to the area of operations we assess the security as to our own … and as per the directions of the civil aviation. We stopped flying to Baghdad and Irbil for some time and if we know of a security threat we will take it seriously. We highly [appreciate] the lives of our staff and the passengers.

But if one airline is pulling out and the others are staying then that is different,” Sheikh Ahmed said.
According to numbers provided by the company, Emirates is the largest operator of Airbus A380, with 72 aircrafts in its fleet. Furthermore, the airline has 68 more A380s pending delivery, which, when received, will increase the number to 140. It is also expecting another 189 planes to be added to its constantly expanding service.

The carrier has a total of 247 planes, including Boeing 777 and 747, and the smaller Airbus A340 and A330.
Over 2000 pilots, a quarter of whom are Emirati, man the aircraft.
Emirates transported over 49 million passengers last year. This helped Dubai International Airport snatch the title of the world’s busiest airport hub from London’s Heathrow Airport.

It has recently launched a media campaign featuring Jennifer Aniston, which mocks other airlines lacking the luxury services provided by the Emirati carrier, including an onboard lounge and showers.
Despite its growth, the company has no plans to hold an initial public offering (IPO) and its chairman does not see a need at the moment to borrow from the market.

“I always say if we have a need, we will go to the market, but for the time being for us, there is nothing [in the pipeline],” Sheikh Ahmed said, adding there “are no plans for an IPO either.”

Dnata
Operating under Emirates Group, Dnata is one of the largest suppliers of combined air services in the world, offering aircraft ground handling, cargo, travel, and flight catering services across five continents. And according to Sheikh Ahmed, Dnata is about to get even bigger as it is currently negotiating to acquire some U.S.-based companies.

“They are in the process now to acquire some businesses in the U.S., mainly on the passengers’ handling side,” he said.
As it stands, Dnata boasts an army of employees exceeding 75,000 from over 160 countries, working in more than 80 subsidiaries and companies based in five continents.

“When it comes to acquisitions it depends on the time. We don’t say ‘oh we will acquire this business or that business’… it’s not because Emirates is going there that Dnata has to buy or acquire services there,” Sheikh Ahmed said.
He added that more than 67 percent of Dnata’s business comes from outside the United Arab Emirates (UAE).

Challenge to Profitability
However, Emirates Airlines’ road to success is not a smooth one. It is rigged with challenges to profitability ranging from geopolitical tensions and armed conflicts to natural disasters, as well as currency fluctuation.

“You should not forget that we are a dollar-based company and other currencies losing against the dollar has its effect on [us]. The company operates in many countries around the world, so we sell tickets in different currencies… we obviously lose also in the exchange to the dollar,” he explained.

Putting Dubai on the Map
“I cannot say that Emirates brought Dubai to the map. It is like the chicken and the egg saying. Which came first? You know. I think that without Dubai doing so many great things, Emirates wouldn’t be here. So the synergy is that we work together and this has been going on for a long time,” Sheikh Ahmed said.

Sheikh Ahmed, who is the uncle of Dubai’s Ruler Sheikh Mohammed Bin Rashid Al Maktoum, recalled his nephew telling him, “I see lots of people flying via Dubai but they don’t stop here… do something about it.”

Sheikh Ahmed then gathered his team and assessed the situation. “To bring people you need to give them a reason to come. If they are tourists they need the facilities—beaches, entertainment, etc.,” he explained.
It also helps that Emirates gives people the opportunity to come to Dubai any time of the year, any day, and “they can leave at almost any hour of the day if they want to.”

U.S. Immigration and Landing Rights
But as the company continues to grow, it has sparked a fear of competition by several international airlines. Specifically, American carriers have expressed concern should Emirates Airlines receive further landing rights in the U.S., claiming the carrier enjoyed Dubai government’s support. The claim has prompted the U.S. government to put a hold on granting the company more landing rights.

Emirates, however, denies the allegations and has sent its feedback to the U.S. government.

“There is no response yet, but under the existing bilateral agreement we still continue our flights there,” he said.
Asked about the delay in opening an immigration portal in Dubai to handle passengers traveling to the U.S., similar to the one which opened in Abu Dhabi last year, Sheikh Ahmed hoped the move will happen eventually.

“We hope that in the future we will have this service. The Americans are very keen and they want to do it. This has been communicated on the government and airport management levels,” he said.

“I think it is a nice service to have. My problem is that I don’t have the space to do it here and the requirements that comes with it,” he added.

To Sheikh Ahmed, opening an immigration portal in Dubai is not as simple as merely placing a team in a room to operate it. Looking at it from a logistical point of view,  such a step would require finding a piece of land, which he explained, “will be an [sic] American soil, that’s first. Second I have to align all my aircrafts to be at that point, because those people who get processed, they cannot mix with anyone else except with the American flight.”

Unlike Abu Dhabi, which has “less number of flights” from the U.S., Sheikh Ahmed said that Dubai Airport has numerous flights to and from the U.S. landing at multiple terminals, which makes it physically difficult to gather passengers in one place for processing.

“We have to wait and see. I am sure that many American and European companies are waiting to do business with Iran,” he said.. “We will give it some time. Its [impact] should be more positive than negative,” he added.

As a result of Iran verifiably meeting its commitments to curb its nuclear program, world powers lifted the sanctions on January 16.

The U.N. Security Council had imposed the sanctions on Iran in 2006, after it refused to suspend its uranium enrichment program.

However, the UAE, which continued to trade with Iran despite western sanctions, had recently downsized its diplomatic representation with Tehran after tensions escalated between Saudi Arabia and the Islamic Republic.

Diversifying the Economy
Sheikh Ahmed also discussed the country’s economic performance, saying it has succeeded in diversifying its economy and cutting down its reliance on oil.

Dubai in particular has developed its business, tourism, trade, and financial sectors to an extent where they barely rely on oil, which currently only constitutes four percent of the budget.

“We are looking at alternative sources for energy… be it coal, gas, or nuclear, as well as solar. I think that the development in solar energy is advancing and benefiting the UAE,” he said.

“We are pushing … government bodies today to use more efficient sources, efficient cars etc.… It is not a process that will happen overnight, but over time,” said Sheikh Ahmed, who is also the chairman of Dubai’s Energy Council.


Editor’s note: This article has been amended to reflect an updated figure received as to Dnata’s growth. 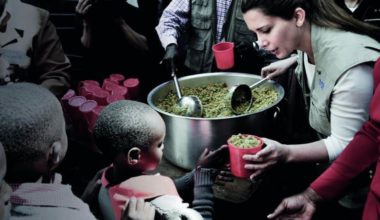 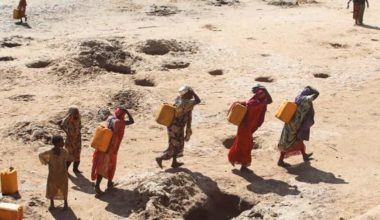 Read More
Fatima Jibrell’s bleak outlook is evident. “We have no drinking water in Badhan today.” For the pastoralists of…