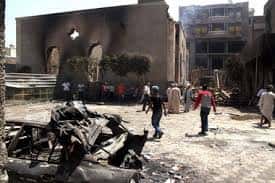 ALKARM, Egypt, May 30 – Soad Thabet’s house no longer has a door. Inside, its walls are blackened with soot and a television lies shattered on the floor. The remains of a red nightgown stand out among the ashes.

Thabet, 70, describes being dragged outside by Muslim villagers and stripped naked in the dirt roads of Alkarm, the Egyptian village where she spent her most of her adult life.

Her crime? Her son, a married Christian, was rumoured to have had an affair with a married Muslim woman. The woman has since denied the affair took place on national television.

“They burned the house and went in and dragged me out, threw me in front of the house and ripped my clothes. I was just as my mother gave birth to me, screaming and crying,” Thabet told Reuters a week after the attack.

Orthodox Copts like Thabet, who make up about a tenth of Egypt’s 90 million population, are the Middle East’s largest Christian community. They have long complained of discrimination in the majority-Muslim country.

Sectarian attacks occur so frequently in Egypt that they rarely attract wide publicity. But Thabet’s ordeal, the public humiliation of an elderly woman, prompted an outcry among Copts and led to the case becoming national news.

“If it were just a burning we could handle it, but what can we do about what happened to the woman? How can you compensate for this insult?” Ishak William, Thabet’s neighbour and relative, told Reuters at his house in Alkarm.

President Abdel Fattah al-Sisi has denounced the Alkarm attack, which underlines that Copts remain vulnerable three years after he took power and pledged to unite the country following years of political turmoil.

Sectarian violence often erupts on the back of rumours about inter-faith romances or suspicions that Christians are building churches without the required official permission.

Homes are burned, crops are razed, churches are attacked and, occasionally, Copts are forced to leave their villages, say human rights groups and residents of the southern province of Minya, home to Egypt’s largest Christian community.

Then come the reconciliation sessions, processes informally backed by the government that see local Coptic priests and Muslim clerics attempt to mediate a communal peace without resorting to the legal system.

Christians interviewed by Reuters said the sessions often end with them making concessions, such as agreeing that certain families leave town or that the church not bear a visible cross, while those who perpetrated the attacks often go unpunished.

Muslim residents and religious officials say the informal process helps broker compromises to avoid a cycle of escalation and retribution.

Copts often go along with it to avert more trouble.

But the latest attack has left a new bitterness among the Copts of tiny Alkarm, in the agricultural hinterland of Upper Egypt. This time, they say, reconciliation is not enough.

“We answer to the law, not to reconciliation sessions. Whoever did this must be held accountable,” said William.

‘PEOPLE WON’T HAVE IT’

Thabet’s ordeal led to the Diocese of Minya releasing a statement demanding justice. The attack subsequently drew condemnation from the government and Al Azhar, Cairo’s ancient centre of Islamic learning.

“We have people getting killed and there is no one answering for it, money stolen, houses looted, girls kidnapped … and we bear it all and let it pass, but now there is escalation,” Bishop Makarios, the highest Coptic church official in Minya, told Reuters by telephone.

“We get told, take reconciliation because it is better for you than other bad scenarios and people are simple and just want to live in peace, but this time people won’t have it.”

Since the case went public, 15 men have been detained in connection with the violence and will be investigated, according to security sources.

Before then, said William, the attackers were freely walking around the village.

Neighbours who witnessed the incident told Reuters it took place on May 20, when a group of Muslim men set fire to seven Christian homes and stripped the grandmother naked in the street after rumours of her son Ashraf’s inter-faith affair.

Ashraf fled with his wife and children on May 19 after receiving threats, said William. His parents went to the police, fearing for their lives, said Ishak Ibrahim of the Egyptian Initiative for Personal Rights. The mob burned down their house the next day, Ibrahim and several local residents said.

The Governor of Minya initially denied the attack took place in comments to local media. On May 26, after it became public, Tarek Nasr, said it was a “minor incident.”

Nasr did not respond to repeated attempts to reach him on his mobile phone. He visited Alkarm on Friday, after Sisi denounced the attack.

“What is happening in Egypt is unacceptable and must never happen again … anyone who made a mistake no matter how many they are, will be held accountable,” Sisi said during a speech at the opening of a housing project on Monday.

On Friday, a joint delegation of Cairo-based Muslim and Coptic clerics visited Alkarm, where several armoured vehicles and dozens of police patrolled the streets. Local Copts refused to meet them.

With deep scars visible on his head, face, and arm, Ishak Yakoub, a Copt who lives next door to Thabet, says he almost died the night the grandmother was attacked and wants the law to take its course and put an end to what he sees as mob justice.

“I heard gunfire so I got out of the house and stood at the doorway. People advised me to get back inside, so I did and locked the door. I climbed up on the roof and saw smoke coming from her house so I called the fire department,” he said.

“I came back down and found they had broken in and were in my house. One of them hit me on the head but I don’t know with what, then they dragged me onto the street and beat me.”

Yakoub later found Thabet hiding in the home of a Muslim neighbour. He took her to his house.

“When I heard what they did, that a woman was stripped naked in the street, I took her to my room and we locked ourselves in,” says Yakoub’s wife, who declined to be named.

Umm Magdi, the Muslim neighbour who sheltered Thabet, played down the incident as “threats from silly youths”.

“My son came in with (Thabet) and told me to dress her. She came into my house and I dressed her. I told her to sit but she wouldn’t … it was like she didn’t feel safe with me,” Umm Magdi said.

“I’ve known her all my life and lived by her side like a sister. She’s Christian and I’m Muslim but I won’t take sides.”

Thabet, wearing a black gown and headdress and looking shaken, appeared in an online video on Friday, saying: “I didn’t ask for anyone’s help. I forgive them.”

But Copts from Alkarm said forgiveness would not prevent future attacks.

“Show me a (Christian) woman that will be able to walk in the street after the authorities leave,” William said. 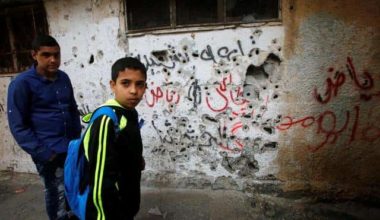 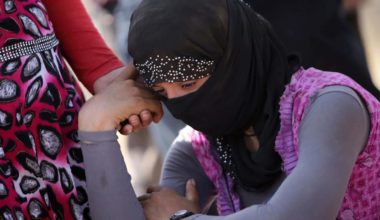