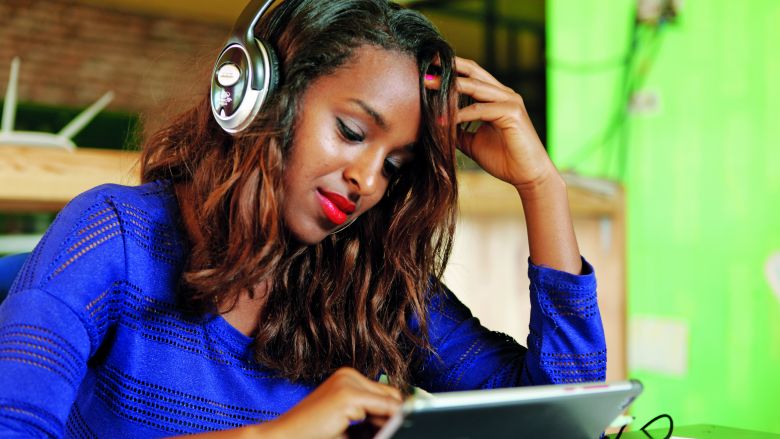 It’s said that fortune favors the bold; in a region of chancers and missed opportunities there are occasions where this does appear to hold true.

On the Bole thoroughfare, Addis Ababa’s Fifth Avenue last July, I was taken up several flights of darkened stairs into what looked like a jazz lounge. There we came across Elias Schulze, a fast-talking, 31-year-old who was intent on making Addis his home.

Schulze was huddled together with a colleague from the Moby Group—an incongruous pair, talking in short, coded bursts about life in Kabul and Baghdad. They were setting up a television station in Ethiopia, Kana TV, according to them. It struck me as a bold, frontier-like hustle; to create, from scratch, an entertainment channel in a notoriously closed market.

“You can write about it once we’ve launched it,” he told me back then. Two weeks ago, it went live.

The seeds of the idea had germinated two years ago; it took nine months to operationalize. “Three Ethiopian co-founders got together and said, ‘We think there’s something to be done here in television. And we think that this market is under-served.’” The three entrepreneurs, Zeresenay Berhane Mehari, Nazrawi Ghebreselasie and Addis Alemayehou, alongside Schulze, thrashed out the idea and then pitched it to Saad Mohseni, the chairman of Moby Group for funds. The latter group was established by Afghan-Australians, who’d also built a television station in Iraq. It led to the largest private investment in Ethiopian media and entertainment.

Kana TV—the K pronounced as a glottalized consonant—is also the brainchild of Berhane, a noted film director and auteur. Berhane is tightly focused on exporting Ethiopian content; his recent film, Difret was screened at the Sundance Film Festival and executive produced by the actress Angelina Jolie-Pitt.
“It’s an amazing south-south experiment,” Schulze says. The group worked in Addis, Kabul and Dubai, alongside their Ethiopian counterparts. The underlying theme, Kana’s founders believe, is that universally appealing stories of adventure, love, and courage are of interest to emerging markets.

Schulze had commissioned a Nigerian Harvard graduate student to conduct domain research on the viability of the channel. It began to take on a serious hue, leading them to commission a new survey. “We helped anchor the biggest report on television viewership in Ethiopian history,” he says.

The IPSOS poll was startling in its findings. “Over half [62 percent] of the daily viewers are watching foreign content every day,” Schulze explains. “One, that means there’s a mass consumption—way over 4 million people in Ethiopia every day that are watching foreign content, in languages that are not theirs and two—not focused on them.” But how are they watching in Arabic, without understanding it?

“Our competition is Dubai One and MBC One, Two, Three and Four—we’re bleeding Ethiopian eyeballs to these channels,” he says. “[Ethiopians] are watching in Arabic and English. Arabic is rarely spoken in Ethiopia—and hardly understood.” Al Jazeera, MBC Action and MBC Max also dominate Ethiopian’s viewing habits, and are also channels operated out of the Arab Gulf.

No revenue or data has ever been collected on this before. “It’s not benefiting these [Dubai] channels because they’re not receiving advertising revenues from Ethiopia. And Ethiopians are not necessarily being served by these channels.”

“Kana uses Nilesat as do pretty much all Ethiopian-oriented stations and non-Ethiopian stations in the region. Our research showed that there are about 8.3 million daily television viewers in urban areas,” Schulze says adding that a director at MBC Four was unaware they even had a market there, and was surprised at the report’s findings.

Kana TV, on the other hand, will operate solely in Amharic “because it’s the lingua franca of the country,” and won’t, Schulze says, exacerbate ethnic or linguistic divisions. There will be a place for future channels in Oromo, Somali or Tigrinya. “There’s a thirst for knowledge that we actually love. So we’re introducing National Geographic, extremely popular in Arabic, but in Amharic.”

The Arab Gulf’s soft power is writ large across Addis Ababa. Nilesat is the powerful carrier of ideas for a generation of Ethiopians who have close ties to Gulf states, with many working in that region’s service sector. Half of the content is slated to be produced by Kana itself locally, and the other half is set to comprise content that has been dubbed into Amharic. “If Ethiopia can export coffee, there’s no reason why we can’t do the same thing with entertainment.”

Seed funding flowed in June of last year, and trips to Kabul and Dubai for training in MOBY Group offices followed suit. “In the future you’ll have Ethiopians going to other markets and training [others],” Schulze says.

Indeed, some months after we’d first met, on a bright day in November, I smoked a cigarette by the fountains in Dubai’s Studio City, beneath the Newsweek Middle East offices. Over a dozen Ethiopian young professionals were downstairs during their break. I asked if they were Habasha, and guessed they must have been in Dubai for Kana’s training program, at the Moby Group. It transpired that they were; the nervous excitement was palpable.

Some of the station’s 100-odd staffers—a median age of 24—had also been sent to Kabul. They found it to be an experience; but the two cities of Addis and Kabul bear striking similarities; wide roads, jaunty sewerage systems overshadowed by mountains and valleys. Indeed, the post-Soviet architectural vernacular of Kabul is eerily reminiscent of Addis; roofs atop low ceilings, a haphazard approach to windows and buttresses.

It’s a far cry from Ethiopia’s troubled recent past.

Television is a powerful medium in Ethiopia. In 1973, a film by Jonathan Dimbleby played a seminal role in altering the nation’s history—and in turn, the psyche of its people. He once wrote in the Guardian: “In 1973… I stumbled on a famine which had already claimed upwards of 100,000 lives but which the government had concealed from the outside world. The film of this holocaust, which I made with a team from the ITV program “This Week,” ricocheted around the globe. It was the first ‘television’ catastrophe of its kind and it soon raised over $150 million—in today’s money—which triggered a huge international relief operation. A few months later, The Unknown Famine, as we called our report, became a catalyst for the overthrow of the quasi-feudal regime of Haile Selassie. Crudely recut to include scenes of high life at the imperial palace and retitled The Hidden Hunger, our footage was used to devastating effect on Ethiopian television to soften up the emperor’s subjects for the military coup which brought Comrade—later President—Mengistu [Haile Mariam] to power.”

Schulze is certain this has no bearing on the present, or on regular Ethiopian viewers. “I think Ethiopians on the street right now think of going home and watching TV, they don’t refer to that. What they go home and refer to is the fact that they can’t understand half of what they see on TV, because it’s not meant for them. And it’s an underserved market.”

Thirty years on, the medium is being used to different effect. The government marks out Mengistu’s crimes of the Communist Derg’s Red Terror age in a museum of the same name, a brutalist infrastructure funded by the Chinese and carved out on Addis Ababa’s Meskal Square.

The nation’s Communist past is still evident today. The country is proud, and its government tightly controlling of all that enters and leaves.

Across tranches of dirt road leading from Moyale in the south, government officials raided a bus I had traveled in, hunting for contraband. Export restrictions are tightly monitored. Produce found elsewhere in the world is difficult to source in Addis; diplomats complained to me of having to buy in bulk abroad and of having to search in vain for good fish or vegetables. This is the Cuba of Africa, after all.

Presaging Kana’s launch, Ethiopian state officials visited to give the operations a once over, asking “logical, rational and ethical questions” on programming content or how the programs were chosen. “We’ve been very transparent with everybody since the beginning,” Schulze avers. The Habasha state had given Kana TV its blessing; a rarity in an otherwise tough climate. Not all counterparts have been as lucky; the U.S.-based Oromia Media Network was jammed 15 times for varying periods since its inception in March 2014, according to a report by Human Rights Watch. And in 2014, at least 30 journalists fled the country and six independent publications closed down and the country is regarded as somewhat dire for journalists or independent media.

Kana TV feels as though it will push boundaries, simply by virtue of bringing “quality, wholesome entertainment in a language that the populace understand,” Schulze believes.

The optimism is there, but it is unclear how the channel will navigate future uncertainty, borne of, at times, an irascible government. “Those are stations that air politics, but in our shareholders’ agreement, legally we are not allowed to do anything religious and anything political,” he says. “There’s a difference between acknowledging the depth of the religious fabric in the country, and even to some degree celebrating that. When it’s Ramadan will we have a special Ramadan, promotional series. And when it’s the end of Easter, of course, because that’s the fabric of the country. That’s very different than having an Ethiopian Orthodox preacher giving a sermon, have a pastor give a sermon, right? That we won’t do,” he added.

The channel’s founders view their work as sympathetic to the state’s development goals, rather than a threat. “We’re lucky for two reasons one is, we’re dealing with markets where there is still a real—and this is in Ethiopia—there’s a real value of being appropriate. The violence is limited. Any sort of inappropriate sexual content is edited or cut—because we do follow the Ethiopian broadcasting law. But second, it’s because it’s a self-regulating household. As soon as there’s a single-television house, as soon as you offend the aunty or the uncle or the mother in the household, she or he will say turn the channel, in which case we’ve lost the viewer.”

Despite the government sanction, it won’t be plain sailing. Watching television is contingent on electrification, and throughout most of Ethiopia, the technology is just not there yet. Eighty-five percent of the population reside in the rural areas, where Ethiopia’s telecommunications infrastructure is virtually non-existent, so televisions are off-limits for the majority of Ethiopians. It’s uncertain as to whether or not this is even the right time to launch, given that an impending drought threatens millions throughout the countryside.

Introducing locally-produced entertainment television to a broader audience will certainly have a knock-on effect. “Our job is to tell stories that matter and that enlighten and inspire and excite and help people imagine—proper entertainment.” 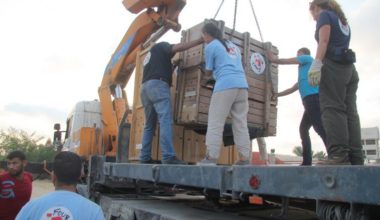 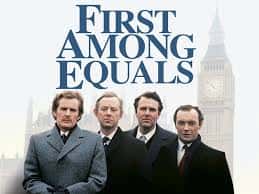 Read More
THE ANCIENT Chinese philosopher Mencius once said, “A state without an enemy or external peril is absolutely doomed.”…