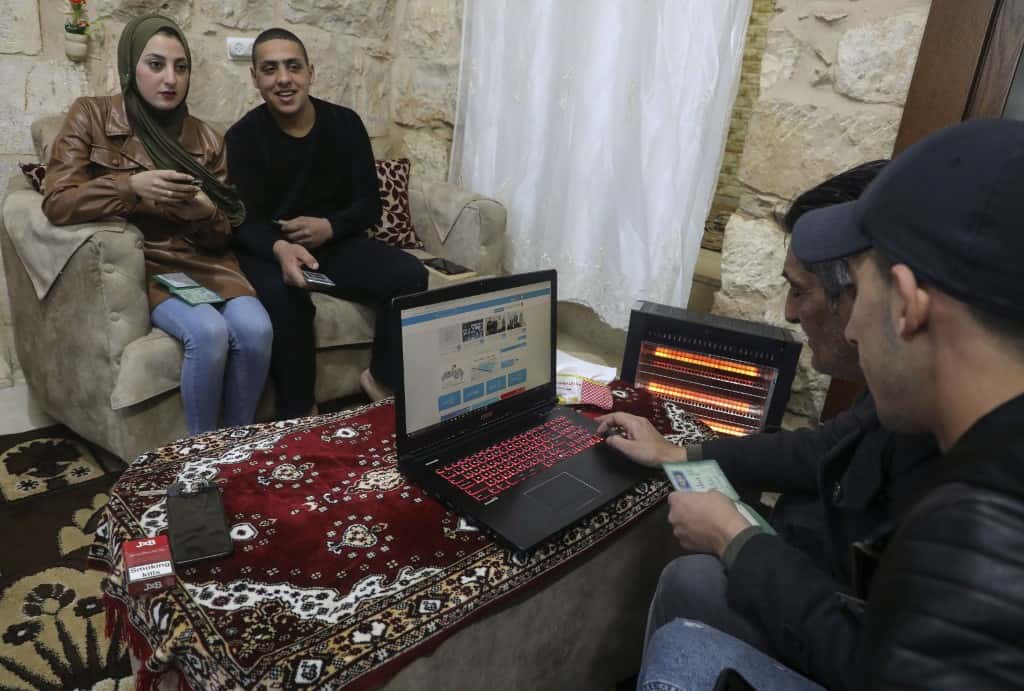 On January 25, 2006, Palestinians in the West Bank and Gaza Strip cast their votes for a new Palestinian Legislative Council (PLC). Hamas, which had not contested the previous PLC elections a decade earlier, was strongly tipped to do well.

The U.S. had spent $2 million to try and thwart a Hamas victory, a sum dwarfing the campaign coffers of other parties. The money funded “dozens of quick projects…to bolster the governing Fatah faction’s image with voters,” and focused on “constituencies where Hamas was doing well.”

It was money spent in vain. Hamas won 74 of 132 seats in the PLC, while Fatah, the long-dominant faction within the Palestine Liberation Organization (PLO) and the Palestinian National Authority (PA), secured just 45. The new parliament was inaugurated on February 18, 2006.

For Israel, the polls’ outcome automatically transformed the PA into “a terrorist authority,” and within weeks, then Prime Minister Ehud Olmert’s government launched a “campaign… focused on bringing the perpetually cash-strapped [PA] to its knees by drying up desperately needed income.”

Israel barred workers in Gaza from operating in Israel, ceased the transfer of tax revenues collected by Israel on the PA’s behalf, and urged the international community to “discontinue all financial assistance” to the Palestinian Authority, and in June 2006, it detained dozens of Hamas parliamentarians.

The measures approved by Israeli officials aimed to punish the Palestinians in Gaza by suffocating the Strip’s economy. In the infamous words of then-Israeli prime ministerial adviser Dov Weisglass, the idea was “to put the Palestinians on a diet but not make them die of hunger.”

The resounding victory of Hamas also dismayed the so-called international guardians of the peace process, the Middle East Quartet (the United Nations, the European Union, Russia and U.S.). While welcoming “an electoral process that was free, fair and secure,” the Quartet immediately imposed three conditions on the Palestinian government: “nonviolence, recognition of Israel, and acceptance of previous agreements and obligations.”

In February 2006, former U.S. President Jimmy Carter, who observed the elections on the ground, criticized the U.S. and Israel’s “common commitment…to eviscerate the government of elected Hamas officials by punishing private citizens,” and warned of potentially “devastating consequences.”

Attempts by Fatah and Hamas to find compromises came to naught, and factional violence increased. Clashes between the respective armed forces of Fatah and Hamas “seriously escalated” in 2007, peaking in June, when Hamas took control of the Gaza Strip. More than 300 Palestinians were killed that year in internal fighting.

In the view of “many Western officials,” Hamas’ offensive was “a pre-emptive strike…before Washington could build up Fatah.” Israel and the U.S. were already discussing “ways to destabilize the Palestinian government” in 2006, and in 2008, details of the Bush administration’s “covert initiative” to “provoke a Palestinian civil war,” were exposed, including bolstering Fatah forces.

A decade later, and the bitter, bloody split remains. National reconciliation efforts have waxed and waned, but substantial proposals for breaking the deadlock have gone unimplemented. Officials pay lip service to national unity, but in practical terms, the Fatah-Hamas divide is as stark as ever.

The results of the ongoing division are calamitous: it impacts the daily lives of Palestinians (whether in terms of mutual attacks on freedom of expression or with regards to practical coordination); it undermines initiatives in the international arena; and it constitutes one of the biggest obstacles to holding legislative and presidential elections.

Recently, there have been new signs of possible behind-the-scenes progress. Senior, “second-generation Fatah leaders” have visited Hamas politburo Chief Khaled Meshaal in Doha, “to assess what is needed to break up the logjam” that has also kept the Rafah border crossing closed. The crossing, on the Gaza-Egypt border, is the Strip’s main gateway to the outside world.
On January 25, Amin Maqbool, secretary-general of Fatah’s Revolutionary Council, announced that a “high-ranking” Fatah delegation would head to Doha in early February to meet with Meshaal in talks sponsored by the Qatari government. The meeting, which was scheduled for February 6, is expected to clear the relations between both parties.

Perhaps these latest endeavours will come to something; but can they be enough to overcome more fundamental questions, such as the nature of resistance, the role of the PLO, and factional interests that have only deepened over time?
Complicating matters further, Fatah and Hamas are each facing their own particular dilemmas and challenges.

For Hamas, the regional picture is complex. The long-term implications of the unfolding thaw in Turkish-Israeli relations remain unclear, while Hamas is looking to maintain a delicate balance in its respective relationships with Iran and Saudi Arabia, and to avoid being implicated in the mounting tensions between Riyadh and Tehran.

Hamas authorities in Gaza are also treading a difficult path with regards to the group’s approach to Salafi jihadist rivals. While the latter’s activities are restricted within the blockaded territory, there is a more ambiguous, “economically-driven relationship” with Sinai-based groups, in light of Egypt’s crackdown on cross-border tunnels.

In December, an article published in the pro-Hamas Felesteen newspaper by Mumen Bsisso called for “revision and reassessment” by the movement, and identified a number of mistakes made in recent years. He listed Hamas’ conduct and strategies after the 2006 elections as examples, arguing the movement was unprepared for a transition from opposition to power.

According to Bsisso, Hamas’ “lack of political and administrative experience in power and in dealing with the various political and services issues subjected it to the criticisms of important factions of Palestinians in the [Gaza] Strip.” Hamas “needs to present a national and responsible project,” which can learn from past mistakes, he wrote.

Fatah, meanwhile, has its own, predominantly internal, problems. Palestinian President Mahmoud Abbas was last elected 11 years ago (to a four-year term). A speech delivered by Abbas in early January was criticized for “[avoiding] any answers to the challenges and threats that endanger the Palestinian cause,” and “said nothing about the transfer of power” after his departure.

Preparations for a post-Abbas succession battle are increasingly being conducted in the open. A crowded-line of key players have emerged for the post including: Mustafa Barghouti, a member of the PLO Central Council, Majid Faraj, the head of general intelligence, Saeb Erekat, chief peace negotiator, Mohammad Dahlan, former Fatah leader in Gaza, and Jibril Rajoub, former head of the Preventive Security Force in the West Bank. However, Fatah’s General Congress, the highest institution in the organization, has not convened since its 6th meeting in 2009. The congress outlines Fatah’s political platform and elects the Central Committee, the executive body, and the Revolutionary Council, the legislative body. The congress serves as the Fatah leadership’s primary source of legitimacy.

In the court of public opinion too, Fatah is in trouble. In an indication of discontent, a recent poll showed that 65 percent of Palestinians in the West Bank and Gaza Strip want Abbas to resign. Satisfaction with Abbas’ performance as president was marked at 35 percent; compared to 44 percent six months ago.

The same poll showed that in a head-to-head presidential contest between Abbas and Hamas leader in Gaza Ismail Haniyeh, the latter would win by 51 percent compared to 41 percent for the former. Jailed Fatah leader Marwan Barhgouti, however, would defeat Haniyeh 56 percent to 38 percent. In legislative elections, Fatah and Hamas both attract 33 percent of the vote each (with 23 percent undecided).

There is also growing Palestinian dissatisfaction with the continued ‘security coordination’ between PA forces and the Israeli occupation. Faraj provoked anger recently by claiming, in an interview, to have prevented 200 attacks by Palestinians against Israelis since October alone, and to have arrested some 100 Palestinians.

Such a policy is particularly galling given Abbas’ lack of results: Israel has continued to aggressively pursue the colonization of the West Bank and East Jerusalem, and the U.S. and EU have failed to apply meaningful pressure on the Israeli government. No wonder that calls for a complete overhaul of the Palestinian leadership are only getting louder and more persistent.

Ten years after the fateful 2006 PLC elections, the immediate outlook is bleak; some experts warn, “if current trends continue, Palestine could become a failed state even before it becomes a real state.” The Palestinian youth uprising, which began a few months ago, throws into even sharper relief the absence of a credible Palestinian national leadership.

In addition, distinct but related processes have become further entangled and mutually dependent: the national unity file, legislative and presidential elections in the West Bank and Gaza, Fatah’s internal struggles, and the revitalization of the PLO’s own decision-making bodies.

Nor can regional meddling, and international interference be ignored. The hypocrisy of the Quartet’s ‘conditions’-that constitute a formidable obstacle for progress in the Palestinian reconciliation efforts-has become clearer as Israelis elect representatives who openly reject Palestinian statehood.

The dismal current state of Palestinian politics can be summarized as a crisis of deficits: in vision, unity, and legitimacy. Those cannot be resolved with short-term fixes, and after a decade of division, there is still no end in sight.

Into the Valley of Death 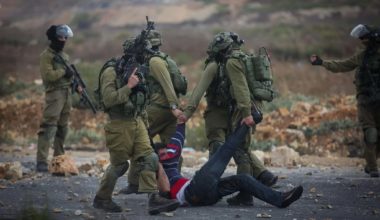 Read More
It was just after midday on Oct. 5, 13-year-old Abd Al-Rahman Shadi Obeidallah was standing with friends in…
FFeatures 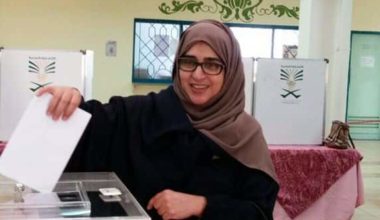