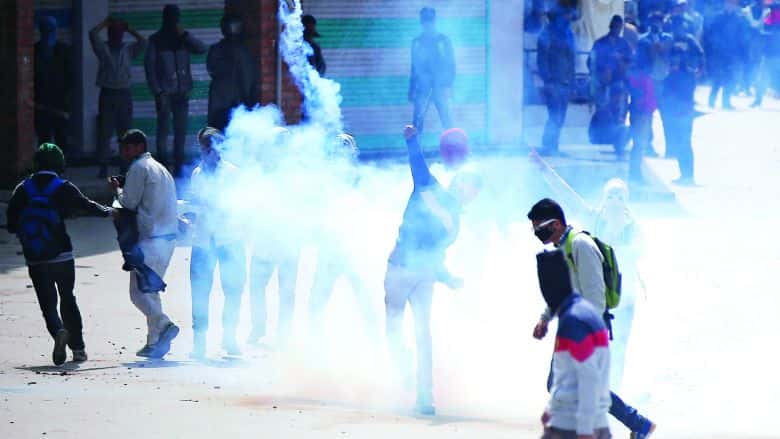 One of the world’s longest struggles for freedom is spiking, yet again. On April 12,  outraged local residents gathered in a town square in north Kashmir to protest against the alleged molestation of a school girl by an army man. Within minutes, reports say two men and an old woman were shot upon by the Indian armed forces and police stationed in the garrison town of Handwara, 70 kilometers from Srinagar, the capital city of Kashmir. The men, Nayeem and Iqbal, were killed with shots to the head and abdomen, and the woman, Raja Begum, received a bullet in her head as she tended to her vegetable patch further away. She was later declared brain dead at a hospital in Srinagar.

A fourth victim, Jahangir, part of a protest against the earlier killings, was killed the following day, as a tear gas shell broke open his skull. On April 15, another youngster, 17-year-old Arif, was slain when the army fired on protestors in the border district of Kupwara.

The violence—the killing of protesters in Kashmir where India has stationed over half a million troops since the beginning of the armed and mass uprising against its rule in 1989—is nothing new. The theater, the disputed region divided into India and Pakistan-controlled parts since the decolonization of British India in 1947, is also an old war. (The two countries have fought three wars over Kashmir and it remains at the core of the 67-year rivalry between the nuclearized neighbors.) The victims are also same old, same old statistical additions to the vast catalogue of India’s war of attrition in Kashmir.

It’s as if the script for these customary assaults on Kashmiri citizens is written in indelible ink, and those who act upon it chapter and verse have it inscribed upon their bullet proof vests.

Soon after the killings, a video appeared online, in which the 16–year-old school girl is seen denying the allegation that the army man molested her. It is unclear who recorded the video and, more crucially, why the army of the world’s largest democracy chose to release the “confessional clip” of a minor. An army spokesperson said it was to counter attempts that “malign our image.” The girl’s mother has also spoken out.

In an interview with a TV channel, she said her daughter gave the statement under duress and was held in police custody. Subsequently, local police said the teenager had reiterated her statement in the presence of a state magistrate. The minor was, however, not accompanied by any lawyers at the time, in an unethical move that is quite possibly also in contravention of the law. A senior local lawyer, Zafar Shah, believed it to be “a serious offense,” and Kashmiri human rights activist, Khurram Parvez, wondered if the army was attempting to legitimize the killings by releasing the video. After more than a week’s detention, the state allowed two lawyers to speak with the teenager. She told them that “once she’s out of police detention, she would struggle for justice.”  Previously, the state would not allow the girl’s family to hold a press conference. The minor remains in custody.

Nonetheless, all this cannot shift focus from the killings, despite attempts by the state and its friendly sections in the media to spin the alleged molestation into center stage—not the murder of five unarmed people. It was the armed forces that opened fire on unarmed protesters, shooting not to halt, but to kill. Not once, but five times. In 2010 when 120 Kashmiris, including many children, were shot dead; in 2009 when two women, Asiya and Nilofar, were gang-raped, then killed, and their deaths blamed on drowning in an ankle-deep stream; in 2008 when around 60 died of Indian bullets—and the years before, and the decades prior to those years. Kashmiris, deeply resentful of Indian rule, could be protesting about anything; electricity shortages, a cricket match, a potholed road. But the result is nearly always the same: a street encounter with a soldier with the intent and license to kill. A dark law that Delhi imposed in Kashmir in 1990 grants immunity to soldiers accused of war crimes, including murder and rape.

Over the years, all this has become normatif in Kashmir, a land where modern-day history is marked by annual seasons of bloodletting. Since the appalling 1990s, when thousands were killed as India came down heavily to crush the uprising, Kashmir has endured so many “bloody summers” that we must now append digits to each reference. There are protests against such killings by the army and the police that enforce India’s immoral rule over Kashmir. These demonstrations are often quelled by brute force, which almost as a rule result in further killings of the unarmed. Those in turn result in charged funeral protests and cyclical processions. In many ways, the last 27 years of the conflict in Kashmir sometimes read like a long funeral march. From year to year, death toll to death toll, and requiem to requiem.

Kashmir’s history is thus numbered: Over 70,000 dead, nearly 8,000 disappeared in Indian dungeons and torture centers or in the 6,000 unmarked burial sites and mass graves in the mountains, hundreds of half-widows, one in every six residents tortured, over 20,000 orphans, hundreds of thousands of Kashmiri Pandits, nearly 650 of whom were killed by insurgents from 1990 to 2011, displaced and dispersed in the hot Indian plains. It requires both remembering and reminding.

The Kashmiri dead may not make for ratings-friendly viewing on much of Indian or international TV, or make for viral outrage in the cantankerous digital arenas of our age, but they do live on in the collective conscience of a beleaguered, besieged people.

At the heart of this tragic conflict is India’s refusal to abide by its promise to the people of Kashmir that they can decide their own future. In its rhetorical war with Pakistan, India insists Kashmir is its “integral part,” even though the country’s first Prime Minister, Jawaharlal Nehru, had helped enshrine a U.N. Security Council resolution guaranteeing Kashmiris a plebiscite.  Pakistan, which aided Kashmiri insurgents with arms and training and later sent its own groups into Kashmir, has historically veered between two positions: Kashmir is its “jugular vein” or it wants a resolution according to the aspirations of the Kashmiri people. Neither country has shown a readiness to depart from this territorialist, land-grab approach. Kashmiris, the main party to the dispute, have struggled to have a say in their own destiny, culminating in the mass uprising of 1989, that India sought to crush with all its military might, killing thousands.

The region’s political classes, some of whom rule Kashmir on behalf of Delhi and who often display public relations playbooks in place of moral compasses, issue boilerplate condemnations of the killings and criticisms of each other when not in power. One understands that hypocrisy may be a job requirement for some politicians, but words of grief and regret ring particularly hollow—cruel, even—if people have been mass murdered under everyone’s watch.

Sections of the broadcast media in India—emboldened by an aggressive Hindu nationalist government at the center—have done their best over the years to serve up official narratives and present a murderous armed force as benign. But even the least critical observer now understands these TV channels function as partner stations of the federal government. There is no other way of looking at the killings. As an academic pursuit, one might wonder if there are alternate readings, but there aren’t. India’s military behemoth in Kashmir has once again killed ordinary people. Hawkish pundits may speak of context and Kashmiris will have theirs too, but the fact is armed forces have shot dead five innocent people. The dissenting Kashmiri, armed with stones and impassioned slogans, has not.

Thankfully, the death toll this year isn’t too high—yet. But it’s a chilling reminder of how easily, how cheaply, life can be snuffed out in Kashmir.

This kind of brutal violence inflicted upon civilians will not cease, because it’s structural; built into the very architecture of the vast military complex that holds Kashmir for India. At the slightest creak, at the smallest hiss of dissent or protest, that machine opens its many-triggered jaws and consumes human lives. There’s a macabre inevitability to it all: How can you expect peace and sanctity of right to life when you surround and intersperse a subjugated population with over 700,000 army, police and paramilitary personnel? The region has the world’s highest concentration of soldiers—one soldier or paramilitary for every 17 citizens, more than any other conflict zone, including Iraq at the peak of the 2003 U.S.-led invasion.

Among those killed in the blood-spattered summer of 2010  was eight-year old Sameer Rah, who was clubbed to death by paramilitaries, his body left on a kerbside. If the world’s largest democracy had held those responsible for killing a boy not much taller than a police baton, we may not have seen another bloody spring in Kashmir.

The deaths of ordinary Kashmiris will only stop when the killing machine is reined in behind the gates of a barracks. Until then, sadly, Nayeems, Iqbals, Jahangirs and Raj Begums will keep getting murdered, and their families compensated with blood money handed by the opportunist representatives of an occupying power.

Mirza Waheed is the author of novels, The Collaborator and The Book of Gold Leaves. 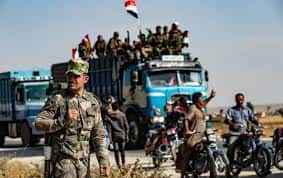 Read More
When Daesh militants took over the ancient city of Palmyra last May, they were able to establish a…
FFeatures 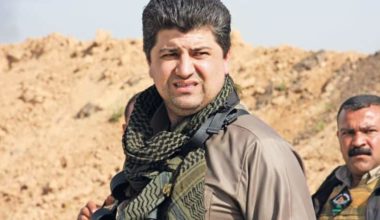 Read More
Lahur Talabani’s journey to the forefront of the global war on terror began in the spring of 2002.…