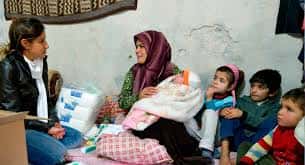 Um Thaer, a widow and mother of five, left East Ghotah in Syria three years ago to find refuge in Jordan. Aside from selling home-made meals whenever she gets the chance, her older sons also work to help provide for the family.

The middle-aged woman is one of nearly 6 million Syrians who were forced out of their war-torn country, with the hope that one day they would return home.
“My 18-year-old son works at a hair salon and the other one, aged 15, works at a butcher shop,” Um Thaer tells Newsweek Middle East.

They both help with the finances, while the three younger siblings attend a public school. She pays 250  Jordanian dinars (JD) or $350 in rent a month in Amman, and the money they earn as a family barely covers their expenses.

Um Thaer’s family also receive a monthly 10 JD ($14) coupon per family member, provided by the United Nations Higher Commission for Refugees (UNHCR), but that barely covers their expenses for rent, food, clothing, and education, among other financial needs.

Like other female refugees, Um Thaer has had her share of hardship from having to cope in a host country, to finding means to provide for her children.

There are 60 million people who are displaced worldwide, half of them are children and their nurturers are first and foremost, women, according to nongovernmental organizations (NGOs).

In the Arab world, women and children are the first to flee war, while the men stay back to fight or protect their homes, says Catherine Ashcroft, consultant and resource mobilization specialist at Mercy Corps in Jordan.

With that, refugee women struggle further to create some semblance of a life for their displaced families.

In that sense, the role of a mother shifts. She has to wear several hats in order to provide the emotional, financial and physical support for her family. Amidst her own trauma and coming to terms with what she has lost, she tries to work towards some sort of social cohesion and family preservation.

“Syrian women face many cultural challenges coming from a socialist-minded country,” explains Ashcroft. In Syria, for example, “it is common for Syrian women to walk down the streets alone and here it isn’t as common,” she adds.

Helping Women Self-Sustain
Life for refugees is fraught with uncertainties for the future. Their status has no deadline, and they have to come to terms with the fact that it could be years before they can return to their homeland. In the meantime, short-term financial solutions are not enough to provide them with a sense of security. With that in mind some charities have initiated training programs to teach the women new crafts that will help them to start-up small businesses and make them self-sufficient.

“We have started up hair salons from homes and encourage women to train in our sewing programs,” says Jacki Scott, founder of the charity Hands on Hope.

She recounts the story of one Syrian woman, Nadia, who hadn’t heard from her husband in five years.

“She lived in a nearby village called Dlayl. She didn’t have enough money to buy bread for her five children,” Scott says. “Nadia trained in [sic] sewing at the center and now raises her kids [with the money she makes from] mending clothes. Some women are real fighters while others give up.”

Scott has been in Jordan since 2008. She says governments need to facilitate the work of NGOs and provide them with the support they need to improve their work.

“Governments make it harder for NGOs to have fundraisers,” says Scott, adding that the foundation was able to hold only one fundraiser this year compared to two last year.

“Good NGOs require more access and less restrictions instead of spending time on paperwork,” she adds.

But there are success stories that help NGOs overcome their frustration with bureaucracy. Scott proudly recalls how the foundation once managed to help a mother and her six children, who had lost their father, find shelter.

“They got kicked out, because the father [had] died,” says Scott.

“We helped them rent a new home and provided them with heat. We help families like these in emergency situations, as the government would take six months to act.”

The organization also helps women raise rabbits to sell them later, a small business that generates enough income to help put food on the table and pay towards rent.

“Rabbits breed every 40 days, so they can use this protein to feed their children. They can sell the rabbits for 15 JD ($21.16). We also help women rent dresses for special occasions like weddings,” Scott says.

Even with their men by their side, refugee women must still try to secure steady jobs to support their families.

For Amal Othman, a mother of three from the Syrian capital Damascus, finding a fixed source of income still haunts her. She has been living in Jordan with her husband and children for the past four years. Her husband, an electricity specialist, does not have a full time job but does some freelance work here and there.

According to Othman, most Syrian women, and their families, “are suffering financially,” in Jordan, which is an expensive country compared to pre-war Syria.

“Aside from the UNHCR coupons, we receive help from families in Jordan who finance my daughter’s studies at university. My daughter also works while studying and helps [us financially],” she adds.

But even the financial aid was decreased from 24  JD($33) per refugee, a month, to a mere 10 JD, forcing Othman like many other refugees, to sell home-cooked meals to compensate for the reduction.

Psychological Support Is a Must
Support for female refugees comes in many forms, and financial is just one of them. More importantly, the women are in critical need of psychosocial support and trauma therapy, as well as regrouping with other family members, to help them preserve their sanity now that they have, in many cases, to take on the roles of mother and father for their children.

“Art psychotherapy is an extremely effective way for women to externalize their feelings and anger in a non-threatening manner,” says Shireen Yaish, a therapist at the KaynounaArab Art Therapy foundation in Jordan.

However, such projects do not receive long-term funding.

“It depends on where the aid goes, but projects like these should be [continuous], because the traumas these women face are on-going,” says Yaish.

“These women are so disappointed, because they know I could be there for only a day, a month, or five months.”

According to Yaish, the question of integration and social cohesion “is only raised when women accept the host as home. For the Palestinians who have been refugees since 1948, their camp is now a full-blown city. The Iraqi women I have worked with also understand that this is it.”

But the Syrian refugees have yet to acknowledge and accept their reality, and move on, which is easier said than done.

“What helps a woman to integrate—and in turn secure her family—is acceptance of her situation, finding a job, sending her kids to school and knowing if her husband is dead or alive. In Syria, this crisis is on-going and getting worse. The question of social cohesion and integration doesn’t arise at this point.”

She says that the more these women feel insecure and isolated, the more conservative they become.

“We are now dealing with the niqab [in] Jordan. Children have come to me and said they will go to hell because their hair is showing,” she says.

The children are also victims of physical and verbal abuse by frustrated and helpless families, according to Yaish.

“If the children are educated and on the way to integration, the burden on the mother will reduce significantly. Governments also need to find a way to employ the men and treat them like respectable human beings.”

It is clear that for a refugee woman to successfully fulfill her many roles, the government and NGOs need to work together to reduce or eliminate the stress factor, be that through psychological support, providing income, residency and work permits, as well as ensuring that the children are receiving a good education.

“If the women fail, then there is no hope,” warns Scott.

Male Refugees Need Help Too
This is not to say that women and children are the only ones suffering from displacement. In addition to NGO programs and agencies that work on empowering women and encouraging literacy, Mercy Corps says that support is also required for male refugees.

“Men who are displaced are depressed and jobless. The women bear the brunt, and we see many cases of physical abuse. Women can sew, knit and cook at home, but the man’s place is outdoors, which is risky if they are caught working illegally,” says Ashcroft.

Meanwhile, the large number of Syrian refugees in Jordan constitute a huge drain on the country’s resources, given that the Hashemite Kingdom is the world’s second poorest country in water sources.

While roughly 80,000 people live in UNHCR’s Al Zaatari Refugee Camp, many have sought refuge in Jordan’s towns and villages where competition over housing, services, natural resources and jobs is creating tensions between both communities, the refugees and the Jordanians.

In schools, Jordanian children attend the morning shift, while the afternoon sessions are reserved for the Syrians.
In terms of employment, Syrians tend to work at night as the risk of being caught working illegally is minimal.

“In certain parts, rent has increased by 300 percent. This is unacceptable for Jordanians. The men cannot afford to get married and leave the family home,” says Ashcroft.

“Medical aid for stress-related disorders are almost non-existent and medical centers don’t have the capacity to accommodate them.”
Mercy Corps works together with Syrians and Jordanians to resolve tension through conflict management training.

“If you set up any program for refugees outside a camp, a proportion of Jordanian’s have to be included. According to best practices, usually 30 percent [to] 50 percent of places for that particular program is reserved for Jordanians. This move [aims] to reduce tension between the Jordanians and [the] refugees.”

Ashcroft, however, believes that “food security, education and primary medical care,” are a mother’s top priorities.

“Right now we are in a food emergency. There are no more coupons from the World Food Program,” she adds. 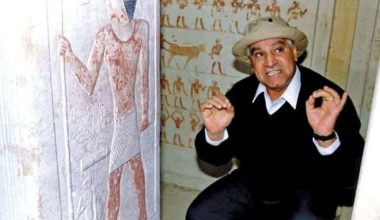 Read More
In 1815, an Italian strongman-turned-explorer and archaeologist of Egyptian antiquities, Giovanni Belzoni, traveled to Thebes, upper Egypt to…
FFeatures 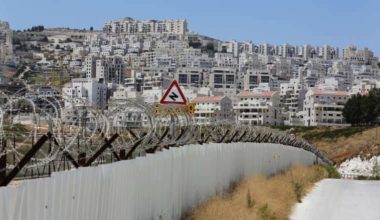 Read More
Ever since the the Israeli military occupation of the West Bank and Gaza Strip began in 1967, successive…