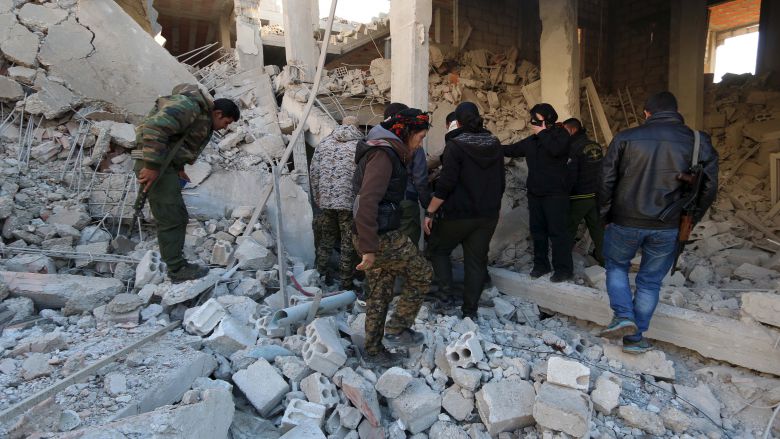 It also cast into doubt the nature of the otherwise seemingly growing relationship between the United States and the PYD and its armed wing, the People’s Protection Units (YPG).

For a while, it appeared as though the Syrian Kurds had it their way. The heroic resistance they put up in the northern border town of Kobani, slightly over a year ago, in the face of a nearly four-month-old siege by Daesh won them world recognition as a capable force in the face of the extremist group.

The Syrian Kurds struck gold when—after having assisted them in Kobani through a relentless campaign of airstrikes—the U.S. developed an undeclared alliance of sorts allowing its military to rely on Kurdish fighters as the spearhead in its wavering efforts to “undermine” and “ultimately” destroy Daesh. The understanding came just when hopes of finding a force that could counter Daesh in Syria were quickly fading away. The Kurds’ success story plunged the YPG and PYD into the center stage of Syria’s web of entangled wars, a departure from when they were often seen as no more than a marginal force along much of the northern border strip between Syria and Turkey.

When in late January the myriad of warring groups in Syria headed to Geneva for U.N.-sponsored peace talks, many expected a seat for the PYD at the negotiations table. The talks are the first attempt to end Syria’s war in two years.

Key Syrian opposition forces, including PYD’s Kurdish rivals, have often accused the party and YPG of collaborating with the regime of President Bashar Al Assad, arguing that PYD-controlled regions had not been bombed by his forces.

Enter Turkey, which refused to allow the PYD and the affiliated Western-backed Syrian Democratic Forces, (SDF), to attend the talks.

The Turkish state views the PYD as an extension of its own rebel Kurdistan Workers’ Party (PKK) and is deeply worried about the Syrian Kurds’ territorial gains over the past few years. And to the surprise of many, Washington has not insisted on the presence of its new partners at the negotiations table.

“If they do not include groups with power and impact in the negotiations, it means they’re not really looking for a solution.They’re only hatching a plot,” says Aldar Khalil, a senior leader in PYD. “No solution will be possible without us. We will continue to manage our own affairs anyway. We do not need them as much as they need us for a solution,” he adds.

A report released late last year by the private intelligence firm, IHS Jane’s, described YPG as having increased its territory by 186 percent, the highest among a slew of forces fighting Daesh in Syria and Iraq.

The PYD is in de-facto control of Kurdish territories in northern Syria referred to by Kurds as Rojava or western Kurdistan. It has set up three self-rule zones in those territories, which have been spared much of the devastation plaguing other parts of Syria.

Strangely enough, even though the PYD are in league with the U.S.-led coalition fighting Daesh, it was Russia that suggested the Kurdish groups take part in the Geneva talks.

Since Russia’s entry into the conflict in September 2015, the PYD has tried to position itself in a way that would allow it to benefit from both U.S. and Russian military assistance.

In December 2015, Russian warplanes were suspected of having carried out airstrikes in defense of YPG forces against extremist pro-Al Qaeda factions in the northern Aleppo region of Al Azzaz.

Russia is even reported to be planning a military base in the Kurdish-majority town of Qamishli on the border with Turkey, but officials in Moscow have dismissed such reports.

“The PYD and YPG feel sidelined after helping the U.S. so much in the fight against Daesh,” says Wladimir van Wilgenburg, a Kurdish affairs analyst based in Irbil, Iraqi Kurdistan. “But Turkey has much more weight over the YPG and PYD because the Syrian opposition is mostly hosted in Turkey and without the opposition there can be no Geneva,” he adds.

Perhaps in an attempt to pre-empt any fallout in relations with the PYD and YPG, U.S. presidential envoy for the coalition to counter Daesh, Brett McGurk, visited Syrian Kurdish territories, in coincidence with the start of the Geneva negotiations.
McGurk made a point of visiting Kobani and paying tribute to the Kurdish resistance against Daesh.

His visit focused on the “next steps in Syria campaign with battle-tested and multi-ethnic anti-ISIL fighters,” he wrote in a tweet referring to the Syrian Democratic Forces (SDF), a coalition mostly made up of YPG and a number of local Arab forces.

In their meetings with McGurk and his British and French companions, PYD officials wasted no time in conveying their concern over being marginalized in the Geneva talks or in any similar future gatherings.

“We criticized the Western delegation for their stance in Geneva,” Khalil tells Newsweek Middle East via telephone from northern Syria. “We were told that the talks are still in [the] initial stages aiming to broker ceasefires between the regime and opposition forces.”

For PYD’s detractors, however, the American reluctance to push for its participation is indicative of a lack of serious will on Washington’s part to develop a lasting relationship with the Kurdish party.

“It’s nothing but a purely tactical relationship as far as the U.S. is concerned,” says Nuri Brimo, a senior official in the Kurdistan Democratic Party of Syria, the main faction in the Kurdish National Council (KNC) umbrella group opposed to PYD’s rule in Rojava.

“It’s the fight against Daesh that has brought the U.S. and PYD together as the U.S. seeks to destroy extremist groups in Syria.”
Brimo brushes aside PYD statements that Syria’s Kurds are not represented in Geneva, saying the KNC has representatives within the broader Syrian opposition coalition participating in the negotiations.

Meanwhile, striking a peace deal is proving to be nothing short of a monumental challenge. Failure to reach an agreement to improve the appalling humanitarian conditions on the ground has brought the current round of talks to a halt, only a few days after they began. Negotiations are set to resume again in late February, according to Staffan de Mistura, the United Nations’ special envoy to Syria.

But the question for many is: how long can a major group such as the PYD be kept away from such crucial talks meant to shape Syria’s future?

“PYD is too powerful to be neglected in the peace process in Syria and in the process of finding a solution to the Kurdish question in Syria,” says Sirwan Hussain, a prominent Syrian Kurdish journalist who covered the Geneva talks.

“It was perhaps smart to exclude PYD now so as not to give the opposition coalition any reason to leave the talks, but in the next round PYD has to be part of the process.”

Syrian Kurds have been oppressed with an iron-fist during more than four decades of the Assad family’s rule in Syria. Having tasted freedom since mid-2012, when the PYD took over the Kurdish parts of Syria, the Kurdish community will not allow a return to the former state of subordination to the powers that will run Damascus.

For a minority such as the Kurds, who have often lost at the negotiations table what they have gained by fighting on the ground, the move to exclude PYD from the talks plays into a familiar theme of historical injustice and conspiracy.

After World War I, the victorious European powers reneged on their promise to grant the Kurds a state of their own, as the borders of the former Ottoman Empire were redrawn. Ironically, the Kurdish demands for independence were ignored during talks, in 1923, in another Swiss city: Lausanne.

In the mid-1970s, the United States also abandoned the Kurds in Iraq during their fight for autonomy against the Iraqi government.

But for the PYD to secure a role in mapping Syria’s future, it might have to make the difficult decision of taking sides between the Syrian opposition and the regime. PYD officials, such as Khalil, often describe it as a third current in between the two sides.

What ultimately matters to the Kurds in Syria, though, is maintaining their autonomous status in the future regardless of who takes the reins of power in Damascus.

“First they have to get guarantees that they will not be attacked by the Syrian regime or others,” says Hussain, referring to a major concern for Syrian Kurds, as they brace to make difficult choices in the near future.