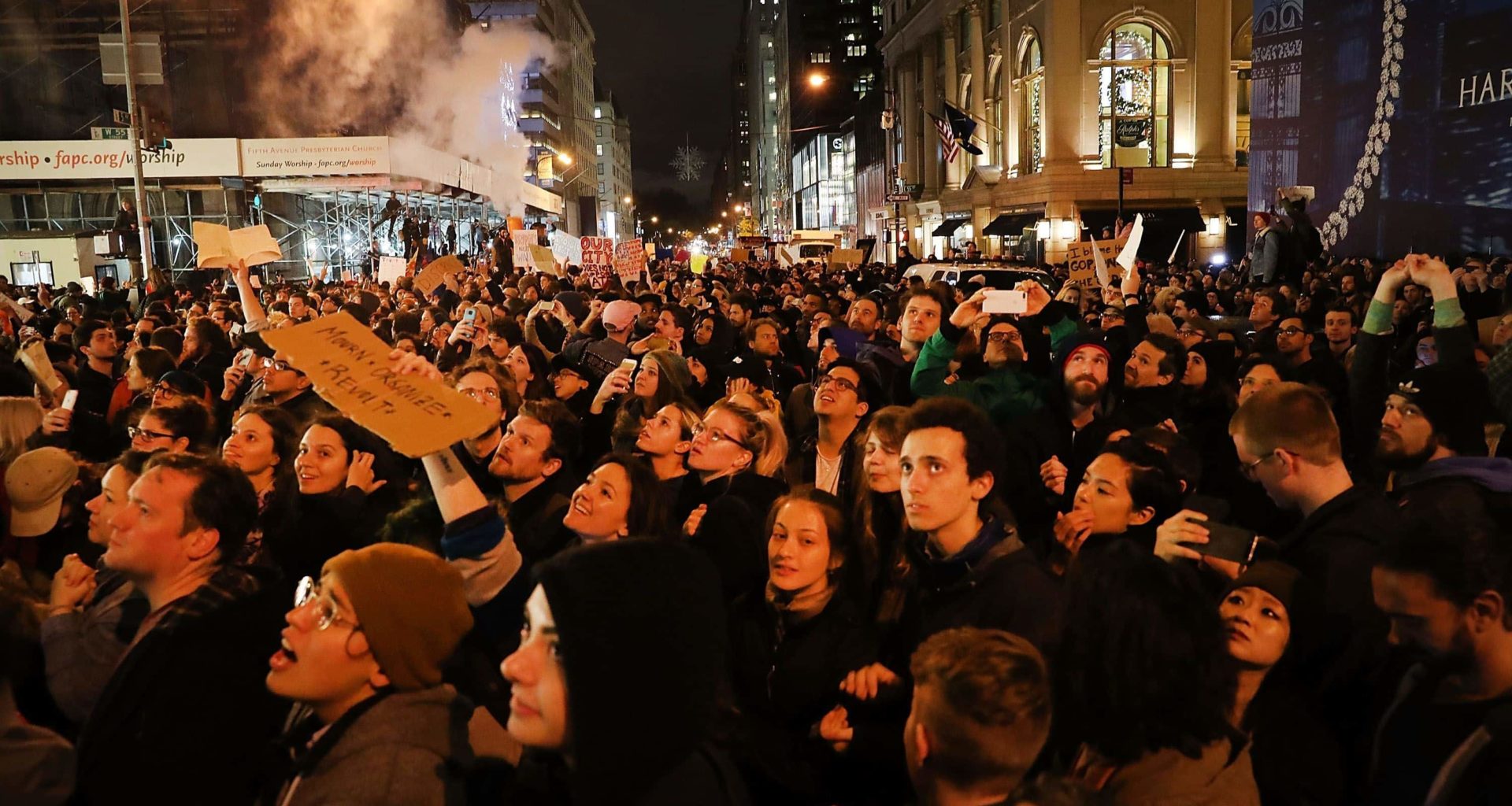 Thousands of Anti-Trump Protesters Take to Streets of U.S. Cities

CHICAGO/NEW YORK, Nov 10 – Demonstrators marched in cities across the United States on Wednesday to protest against Republican Donald Trump’s surprise presidential election win, blasting his campaign rhetoric about immigrants, Muslims and other groups.

In New York, thousands filled streets in midtown Manhattan as they made their way to Trump Tower, Trump’s gilded home on Fifth Avenue. Hundreds of others gathered at a Manhattan park and shouted “Not my president.”

A demonstration of about 6,000 people blocked traffic in Oakland, California, police said. Protesters threw objects at police in riot gear, burned trash in the middle of an intersection, set off fireworks and smashed store front windows.

Police responded by throwing chemical irritants at the protesters, according to a Reuters witness.

In downtown Chicago, an estimated 1,800 people gathered outside the Trump International Hotel and Tower, chanting phrases like “No Trump! No KKK! No racist USA.”

Chicago police closed roads in the area, impeding the demonstrators’ path. There were no immediate reports of arrests or violence there.

“I’m just really terrified about what is happening in this country,” said 22-year-old Adriana Rizzo in Chicago, who was holding a sign that read: “Enjoy your rights while you can.”

In Los Angeles, protesters sat on the 101 Hollywood Freeway, blocking traffic as police in riot gear watched. A rally and march drew more than 5,000 people, many of whom were high school and college students, earlier in Los Angeles, local media reported.

In Seattle, police responded to a shooting with multiple victims near the scene of anti-Trump protests. Police said it was unrelated to the demonstrations.

Protesters railed against Trump’s campaign pledge to build a wall along the border with Mexico to keep immigrants from entering the United States illegally.

Hundreds also gathered in Philadelphia, Boston and Portland, Oregon, on Wednesday evening. In Austin, the Texas capital, about 400 people marched through the streets, police said.

A representative of the Trump campaign did not respond immediately to requests for comment on the protests. Trump said in his victory speech he would be president for all Americans, saying: “It is time for us to come together as one united people.”

Earlier this month, his campaign rejected the support of a Ku Klux Klan newspaper and said that “Mr. Trump and his campaign denounces hate in any form.”

Earlier on Wednesday, some 1,500 students and teachers rallied in the courtyard of Berkeley High School, in a San Francisco Bay Area city known for its liberal politics, before marching toward the campus of the University of California, Berkeley.

A predominantly Latino group of about 300 high school students walked out of classes on Wednesday in Los Angeles and marched to the steps of City Hall, where they held a brief but boisterous rally.

Chanting in Spanish “the people united will never be defeated,” the group held signs with slogans such as “Not Supporting Racism, Not My President” and “Immigrants Make America Great.”

Many of those students were members of the “Dreamers” generation, children whose parents entered the United States with them illegally, school officials said, and who fear deportation under a Trump administration.

“A child should not live in fear that they will be deported,” said Stephanie Hipolito, one of the student organizers of the walkout. She said her parents were U.S. citizens.

There were no immediate reports of arrests or violence.

Wednesday’s demonstrations followed a night of protests in the San Francisco area and elsewhere in the country in response to Trump’s victory against heavily favored Democratic rival Hillary Clinton.