HAMMAM AL-ALIL, Iraq, Nov 10 – On the banks of the Tigris river, men sit and watch, smiling with relief as Iraqi policemen, soldiers and local youths bathe in muddy spring water in a town that was recaptured from Daesh just a few days ago.

Across town, there is a grimmer scene: two stinking corpses, their feet tied together, rot in the sun in a large dirt quadrant walled by four man-made earth berms.

One body is intact. The other has parts missing. A severed head lies next to them, its skull mostly visible. What appear to be several other corpses protrude from the dirt and detritus.

A policeman cautions not to approach or touch the bodies, in case they are booby-trapped.

Narrow, shallow trenches up to 20 yards long have been dug in some parts of the quadrant.

Residents of the town, Hammam al-Alil, say this is the site of a mass grave which Iraqi forces reported to have uncovered on Monday after driving out Daesh militants.

Iraq has launched an investigation into what would be further evidence of the ultra-hardline group’s brutality against people living in areas under its control since it established its self-styled “caliphate” across much of northern Iraq and Syria more than two years ago.

An operation involving the Iraqi army, Kurdish forces, Shi’ite and tribal militias and backed by U.S.-led air strikes has driven the jihadists out of many areas surrounding Mosul, with the aim of recapturing its last major city stronghold in Iraq.

As Daesh has retreated, it has lashed out, with local residents such as those of Hammam al-Alil paying the price.

“Some were beheaded, and some were shot,” said 35-year-old Odeh, whose brother was taken away by Daesh fighters in the town near the start of the Mosul operation last month.

“They rounded up people from the town, and from other areas, and killed them there, where the grave is. It was revenge, they took it out on anyone over the age of 15,” he said.

Daesh held the agricultural college, 200 yards from the site, as a base and a place to torture or kill people, residents said. Many estimated that up to 200 people were killed in the weeks before Daesh withdrew from the town.

Reuters could not access the college because Iraqi police said it had not been cleared and might still be rigged with explosives.

Aid organizations and local officials have cited reports that Daesh executed dozens of people in Hammam al-Alil and barracks nearby on suspicion of planning rebellions in and around Mosul to aid the advancing troops.

The Iraqi military said its forces at the complex discovered the decapitated corpses of at least 100 civilians.

The militants transported 1,600 abducted civilians from the town of Hammam al-Alil to Tal Afar last week, possibly for use as human shields against air strikes, and told some they may be taken to Syria. They also took 150 families from Hammam al-Alil to Mosul.

Most of those executed in Hammam al-Alil were former members of the Iraqi police and army, taken from villages the group was forced to abandon, a local official said.

Residents confirmed most of those taken were police or their family members, including the brother of Mohammed Hassan, himself a former policeman.

“My brother Ahmed was killed – I heard he was among those executed. They (Daesh) pulled him out of my car, because he had been in the police. He might be in the grave,” said Hassan, who was sitting by the river.

“He might also be in there,” he said, pointing at the water.

“They killed people here, too. They would execute them on the bank and throw them into the river.”

Local Daesh leaders used the lush tree-lined spa area of Hammam al-Alil, a thermal water resort, for themselves and would not let anyone else in, Hassan said, watching as mud-caked youths took photos in the water. Many men were freshly shaved. Under Daesh, men had to wear beards.

Many buildings in the town have been damaged or destroyed in the fighting. The mangled, charred wreckage of cars and trucks litter the streets. White flags remain hoisted above some homes, an apparent effort by residents not to be targeted as security forces advanced.

In the distance, smoke billows from the burning oil fields of Qayyara, which Daesh fighters abandoned and set fire to in August, after a U.S.-backed advance before the Mosul operation began in earnest.

Hammam al-Alil and its thermal springs are said to have healing qualities. It will be some time before the physical and psychological destruction of Daesh is washed away.

Thousands of Anti-Trump Protesters Take to Streets of U.S. Cities 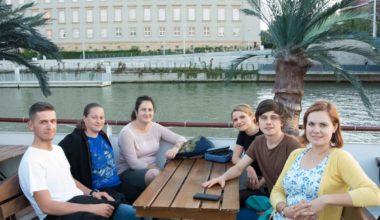 Read More
SYDNEY, Feb 11  – Australia’s government has directed senior officials on how to respond to questions about political…
WWorld 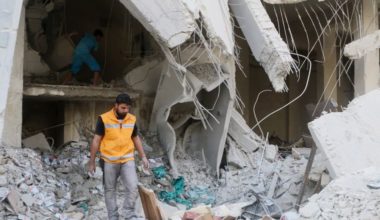