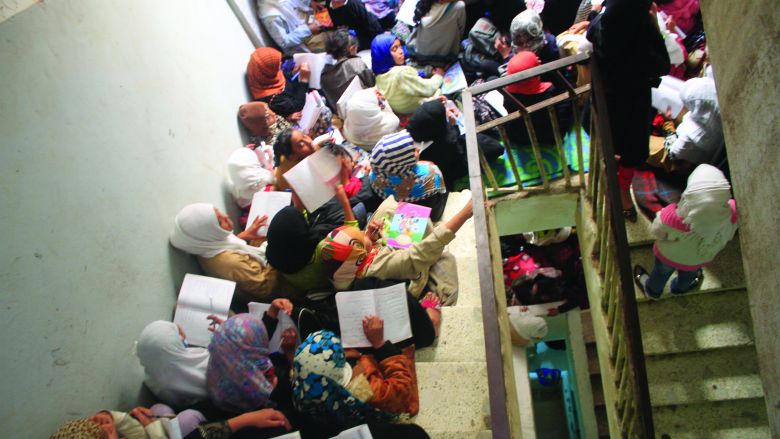 Schools in one of Yemen’s largest cities, Taiz, are not empty. But they are not filled with students, either. Those that have not been completely destroyed by the conflict are now makeshift camps or barracks for Houthi rebels or resistance fighters locked in a nine-month war. Students have been left to study in streets, mosques or on stairwells of shelled-out buildings.

The destruction of schools in heavy shelling by Houthis and the Saudi-led Arab coalition brought education to a halt last year in Taiz, a city that prides itself on being “Yemen’s cultural capital.”

However, the education office in Taiz, in western Yemen, announced—with great determination—that classes will resume on January 16th and instructed school headmasters to find alternative venues.

Teachers in one of the schools destroyed by Houthi shelling, Al Hakimi School in Al Muroor neighborhood, persuaded some residents in the nearby Alogainat area to allow them to use stairways as makeshift classrooms.

Aiyah Nasser, 12, a student at Al Hakimi School, sits on one of the stairs, huddling her books in her lap as she tries, with difficulty, to take down notes.

“I did not study last year because of the war, and when my mates told me that classes will begin on January 16th, I went to school but… I only found a pile of rubble,” she tells Newsweek Middle East.

By the second day, one of her teachers told her that lessons would be given on the stairs of a building in the Alogainat neighborhood, in the center of Taiz.

But Nasser was not happy with the new venue—understandably so. She longed for the familiarity of a normal school day, playing with friends, taking lessons in a proper classroom and feeling secure within the high walls of campus.

“I miss my school, I miss the rooms and I hope to sit on a chair again [and] to write on a desk, but also I need to study… so I came to the school on the stairs,” Nasser says.

Many parents opted to keep their children home, believing it would be safer for them than being outdoors.

The besieged areas in the city of Taiz are constantly targeted either by the Houthis or airstrikes by the Saudi-led coalition.

Many residents have already fled the city for other provinces or towards the rural areas in Taiz. Only those who were adamant about safe-guarding their homes stayed behind.

The war in Taiz between the Houthis and the Popular Resistance fighters, loyal to Yemeni President Abdrabbo Mansour Hadi, broke out in April 2015, when the rebels tried to take over the city. The rebels subsequently imposed a siege on Taiz and blocked its supply routes. Residents now rely on donkeys to smuggle in basic commodities and medicine.
Next to Alogainat, a dozen students sit in a small alley after their school, the June 13th Primary School, was destroyed in shelling by the Houthis.

Two military vehicles guard the alley’s entrances, while resistance fighters prevent anyone from taking photos of the students to protect the location from Houthi rebels.

“Rockets targeted a house near this street last week, and some people were killed, but we do not have an alternative place to study,” Ahmed Khalil, 15, tells Newsweek Middle East.
Khalil, whose cousin was killed in his house, approaches the matter of studying outdoors with a fatalistic attitude well beyond his teen years. “I cannot change my fate by staying at home,” he says, explaining that Allah has already decided how he would die.

Manar Al Azazi, who teaches English at Al Hakimi School, tells Newsweek Middle East that the decision to resume classes under the circumstances is to prevent the loss of another school year.

“Taiz is the cultural capital of Yemen, and it is a shame to halt education [here],” she says, adding that only about half of the students showed up to the new classes.

She says the new venues are safer than school classrooms, because stairs are located in the center of a building, while rockets generally strike the classrooms.

Rami Esam, 14, lives with his family in the basement of their house. He is one of many students who prefer to stay home, arguing that it was easier for him to ignore the bullets of snipers and the sound of shelling.

“I know that the shelling falls everywhere in the city, so I am not crazy to study in the street. If our teachers will teach us inside basements, I will go to study,” Esam says.

The deputy of Taiz’ education office, Mohammed Al Galal, says that despite the great security risks, regular classes could resume in 1,115 of the province’s 1,626 schools, most of which are located in rural areas.

“We could not open 511 schools, most of them inside Taiz city, as some of these schools have been destroyed by Houthi shelling or by the Saudi-led airstrikes on the city, while others have become barracks for the warring sides,” Galal tells Newsweek Middle East.

He says that in addition to alleys and stairways, classes are now taking place inside mosques.
“500,000 students resumed their studies and can begin their new year, while 350,000 students can not resume their studies for various reasons, and most of those who did not join live inside the city,” he says.

Some schools in rural areas are now housing internally displaced people, but residents can always find alternative venues contrary to the situation in the city, where the task of finding proper indoor replacements is almost impossible.

“The destruction of schools, the storming of schools by the warring sides, turning schools into camps, and the fear of shelling are the main reasons that prevent students from joining classes in Taiz,” Galal explains.

But education officials have pushed for classes to resume for a very different reason altogether. Studies must go on, they believe, as a large  number of students have now joined the war. A return to some form of education can keep the children focused on their future and prevent them from going down a violent—and bleak—path.

He says that the education office is still trying to persuade the warring sides to evacuate the schools, but there has been no positive response yet. In a war, there is simply no room to think about the future of education and that of the children, he laments.

But Galal refuses to back down. “We will not stop the study in Taiz, and we will work hard to continue teaching the students even if the warring sides do not evacuate the schools,” he concludes, defiantly.

One such example is the Zaid Al Moshki School, ranked number one in Yemen. It boasts a large campus and now serves as both the headquarters for the Popular Resistance and a training camp for its new recruits.

Moa’ath Al Yaseri, a leader in the Popular Resistance in Taiz city, tells Newsweek Middle East that students can study anywhere; in mosques or under the trees, but the fighters cannot leave the schools.

“The recruits need yards for training, and they need rooms for living, so the schools are the best place inside Taiz city. The recruits cannot leave the city for rural areas because of the Houthi siege,” Yaseri adds.

Some schools have become barracks, some have been reduced to rubble, and dozens have become camps for the internally displaced, but in all of the chaos the children of Taiz emerge as the main victims. 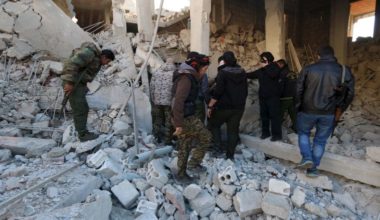 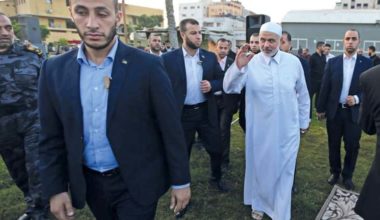 Read More
In Gaza, the movement is strapped for cash, as the territory’s residents continue to suffer under Israel’s illegal…